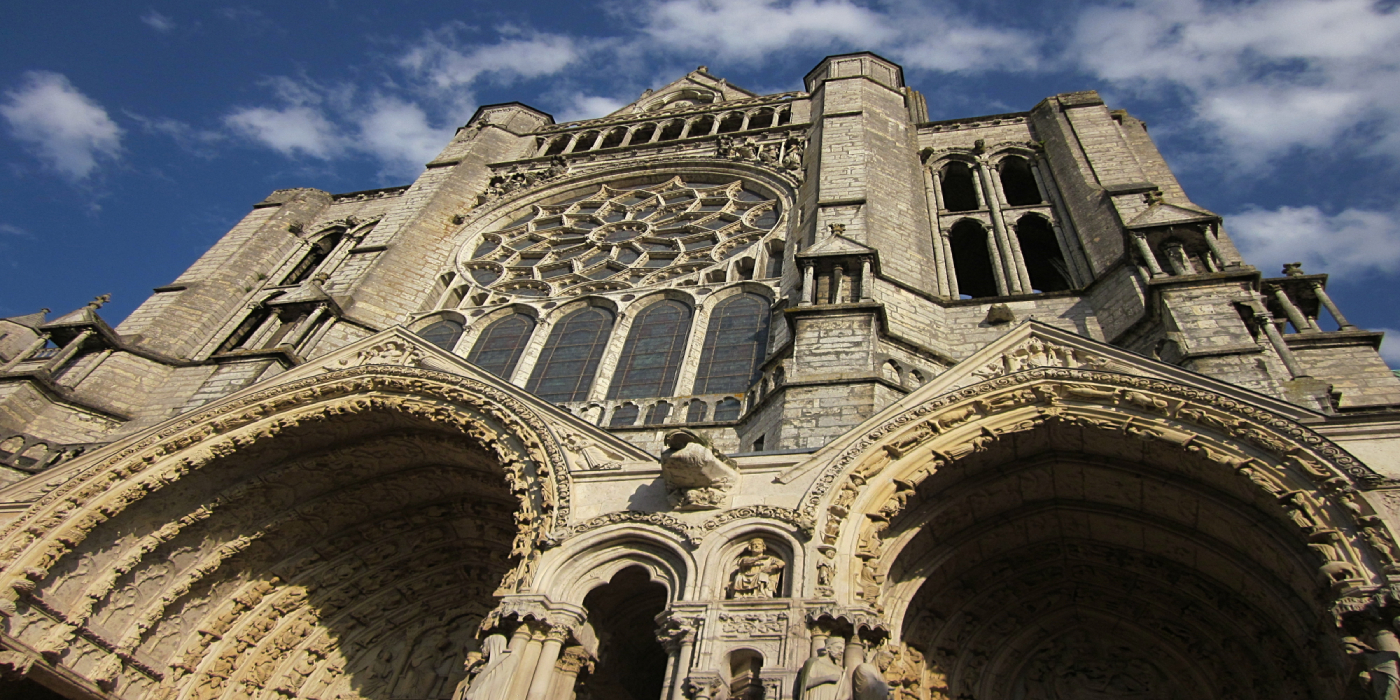 Current building Chartres Cathedral, built of limestone, is around 34 m high and 130 m long internally. It has a four-bay …
Read More

The damage inflicted by the fire of 1194 is hard to assess today, although contemporary chroniclers indicated that it was …
Read More

Apart from Fulbert’s crypt the earliest part of the Chartres Cathedral is the west end. Architecturally, its most prominent features …
Read More

Prior to the current gothic cathedral, there was another church standing on the current site. The oldest surviving part of the …
Read More

Our Lady of Chartres is par excellence a cathedral of images, both carved and painted. Portals to west, north and …
Read More

The west portal of Chartres Cathedral, known as the Royal Portal, was part of a campaign to beautify the cathedral, …
Read More

When Chartres was rebuilt after the fire of 1194, both the scale and extent of cathedral imagery had changed. Gothic Chartres …
Read More

The Chartres Cathedral is probably the finest example of French Gothic architecture and said by some to be the most beautiful cathedral in France.

The Chartres Cathedral is a milestone in the development of Western architecture because it employs all the structural elements of the new Gothic architecture: the pointed arch; the rib-and-panel vault; and, most significantly, the flying buttress.

The cathedral is also celebrated for its many stained-glass windows and sculptures. Because most of its 12th-and 13th-century stained glass and sculpture survives, Chartres Cathedral is one of the most completely surviving medieval churches.

Its spiritual intensity is heightened by the fact that no direct light enters the building. All the light is filtered through stained glass, so that the whole experience of visiting the Chartres Cathedral seems out of this world.

The interior of the Chartres cathedral is remarkable. The nave, wider than that of any other cathedral in France (52 feet, or 16 meters), is in the purest 13th-century ogival style.

In its center is a maze, the only one still intact in France, with 320 yards (290 meters) of winding passages, which the faithful used to follow on their knees.

The warm glow of the light inside the cathedral results from the incomparably beautiful stained-glass windows, which date mostly from the 14th century.

The Chartres Cathedral was built following a fire that largely destroyed the previous church in 1194, the new choir being complete by 1221 and the whole building consecrated in 1260 as one of the most compelling expressions of the strength and poetry of medieval Catholicism. See Chartres Cathedral before 1194 and Chartres Cathedral after 1194 for more details.

The city of Chartres owed its prosperity to its bishop and chapter, who had established four annual trade fairs on the feasts of the Virgin Mary, to whom the cathedral was dedicated – her Nativity, Annunciation, Purification and Assumption.

The choice was colored by the claim of the cathedral to possess the robe that Mary wore when giving birth to Christ.

A piece of oriental silk given to Chartres in about 876 by Emperor Charles the Bald, its preservation in the fire of 1194 was regarded as miraculous. It still survives to this day in the Treasury.

The initial Chartres Cathedral Architecture was the clerestory, the upper area of the wall supported on the arcades, which took the form of a huge glass casket in which the architecture merely serves as a frame for the stained glass filling the two rows of enormous windows.

To provide stability for the daring construction, immense flying buttresses were used in an unprecedented way.

The glass, made around 1200-1235, follows a uniform style, with figures in the upper panels related to the legends of saints, and in the lower panels representing the trade guilds and corporations who paid for them. Further donations for the glass and sculpture came from the nobility and gentry of the Ile de France.

Chartres Cathedral ranks as a triple masterpiece. Equally superb are its architecture and sculpture, survivors of two major fires and numerous wars and revolutions.

Its last narrow escape from total destruction occurred on a warm June night in 1836, when an unexplained fire destroyed the roof timbers and melted the lead.The timbers over the nave were replaced by an iron structure and then roofed over with copper.

The cathedral school at Chartres had been a famous centre of learning under the bishop St Fulbert (960-1028).

This didactic tone was later expressed in the programme selected for the glass and the sculpture, which was evidently the product of much learning. It unfolded a vision of the role of the church in world history that was promoted by Pope Innocent III (1198-1216) when the temporal power of the papacy was at its height.

The programme was given expression in the sculpture on the Royal Portal of 1150-1175, on the west front, and on the two immense transepts that were added on the north and south sides.

Each is a miniature pilgrimage church, with a traditional west front with three portals and porches where figure sculpture stresses the mission of the church to teach and preach.

The north portal, containing more than 700 figures, shows the antecedents of Christ, the south the era of the church.

Chartres has become the focus of a new type of pilgrimage dedicated to the preservation of the Latin Mass, which, following the Second Vatican Council, was replaced in 1969 by the graceless new liturgy. Thousands of pilgrims travel to it on foot, saying the rosary, to hear the timeless words of the old Mass in this darkly glowing interior.